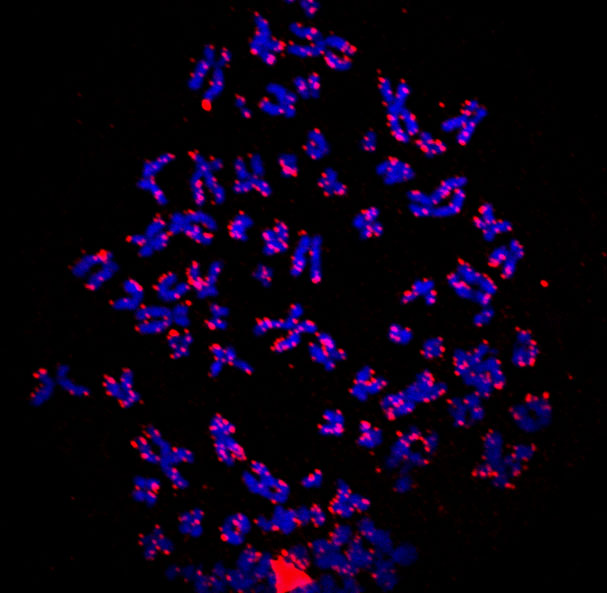 Kaposi Sarcoma is a tumor derived from the inner layer of blood or lymphatic vessels. It often emerges on the skin and in internal organs of AIDS patients. In the film Philadelphia HIV-infected Andrew is startled when he detects a dark spot in his face. However, Kaposi Sarcoma can also occur in people who are not infected with HIV, especially in Mediterranean countries and in East/Central Africa. The cause of this tumor is Kaposi Sarcoma-associated herpesvirus (KSHV), which is also called human herpesvirus 8 (HHV 8). Kaposi Sarcoma may manifest itself not only as dark spots or lumps on the skin, but can also cause life-threatening bleeding if it affects internal organs. In sub-Saharan Africa, Kaposi Sarcoma is the commonest tumor in men. After infecting exposed individuals, KSHV persists for the lifetime of the infected person. However, in most individuals with an intact immune system, KSHV is innocuous, because a functioning immune system is able to control this virus.

The group led by T. F. Schulz wants to understand how KSHV manages to establish such a long-lasting infection. Scientists in this group focus on how this virus manages to maintain its genetic information in the infected cell in a manner that allows it to escape the detection by the immune system and yet to be transferred from mother to daughter cell during cell division. In doing so, they concentrate on a particular viral protein, the latency-associated nuclear antigen LANA, which mediates many of these functions and can also reprogram the infected cell for the benefit of the virus. An important aspect of their work is to understand the structure of LANA and the nature of tiny ‘territories’ in the nucleus of the infected cell in which the virus resides in a latent form. Their long term aim is to find ‘weak spots’ in this interaction between the virus and the infected cell that could perhaps one day be targeted by new treatments

The cancer-causing (oncogenic) lymphotropic gamma herpesviruses Epstein-Barr virus (EBV) and Kaposi Sarcoma herpesvirus (KSHV) persist in a latent form – i.e. without producing new viral particles – in dividing cells, most importantly B-lymphocytes. They therefore need mechanisms that guarantee the replication of the circular viral genome during the S-phase of the latently infected cell and the distribution of replicated genomes to daughter cells during mitosis. In addition, latency involves a restricted viral gene expression pattern.
The aim of project C1 is to understand the persistence of latent KSHV genomes at the molecular level as a basis of perhaps identifying new targets for therapeutic intervention. The KSHV latency-associated nuclear antigen LANA plays an essential role during latent viral persistence: it is required for the replication of the latent KSHV episome during the S-phase of the cell cycle, tethers viral episomes to mitotic chromatin, and thereby ensures that replicated viral genomes are passed onto daughter cells as if they were additional chromosomes. Work in project C1 has solved the molecular structure of a LANA domain that interacts with viral latent DNA and has thereby allowed investigators to build a model of how LANA assembles complexes of viral DNA and associated chromatin (Hellert et al., PLoS Pathogens 2013; Proc. Natl. Acad. Sci. USA 2015).

Currently ongoing work aims to resolve the role of cellular Brd2 and Brd4 proteins during the interaction of complexes of LANA and viral DNA with ‘active’ regions in the cellular chromatin and the ability of LANA to influence cellular gene expression. We also made the surprising discovery that cytoplasmic variants of LANA play an important role in antagonizing the innate immune response in order to ensure that viral DNA is not detected by the cellular sensor of cytoplasmic DNA, cGAS. This prevents cGAS from activating the interferon pathway and thereby inhibiting productive viral replication (Zhang et al., PNAS 2016). Furthermore, cytoplasmic LANA also antagonizes Mre11 and RAD50, two components of the double strand DNA repair complex, which have recently been shown to activate another innate response pathway, NFkB, and this also helps the reactivation of KSHV from latency (Mariggiò et al., PLoS Pathogens 2017). Taken together, our results show how LANA functions during the assembly, replication and shielding from the innate immune system of latent viral DNA.

Thomas Schulz is talking about his research at CRC 900

Thomas Schulz is the founder and speaker of the CRC 900. His project C1 focuses on the persistence of Kaposi’s sarcoma herpesvirus. He and his research group want to understand how the viruses can remain in the body for long periods during the latent phase and how they are then reactivated.

Publications of the project C1