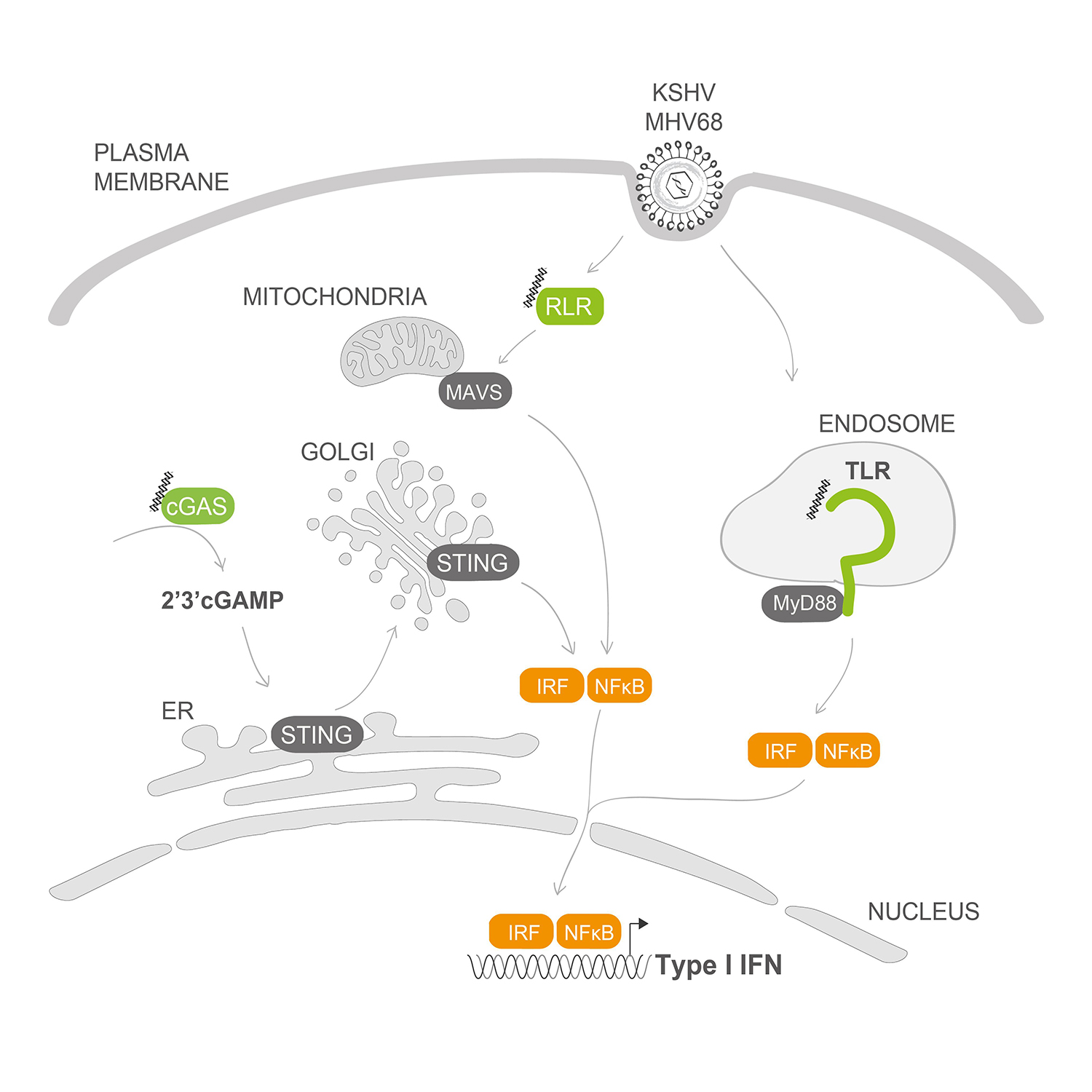 The growing family of pattern recognition receptors includes the DNA sensor cGAS, the RIG-I-like receptors (RLR), and Toll-like receptors (TLR). Upon binding their ligands such as viral or aberrantly localised cellular nucleic acids, they induce a signaling cascade leading to transcription of type I interferons (IFN) and proinflammatory cytokines (e.g. TNF). This potent antiviral response is essential for host control of viral infection.

Kaposi’s sarcoma-associated herpesvirus (KSHV) was identified in 1994 and is one of the nine human herpesviruses known to date. Since its discovery, KSHV has been identified as the causative agent of three neoplasms, including (1) Kaposi’s sarcoma, a cancer of the blood vessels, 2) body cavity-based lymphoma, a cancer of white blood cells, and (3) Castleman’s disease, which causes severe lymph node enlargement.

Moritz Kaposi, a Hungarian doctor, first described Kaposi’s sarcoma in the 19th century. However, it was only with the identification of KSHV genetic material in Kaposi’s sarcoma, more than one hundred years later, that the US scientists Yuan Chang and Patrick Moore could show that a novel herpesvirus was the causative agent of this form of cancer.

A characteristic feature of all herpesviral infections is that healthy individuals can become infected, but in most cases they are able to control viral replication. The host and virus are thus able to peacefully coexist until the balance is disrupted, often due to a weakened immune system. For example, Kaposi’s sarcoma is a frequent complication in AIDS patients, as infection with human immunodeficiency virus (HIV) severely weakens the immune system. The weakened immune system is no longer able to control KSHV replication. Similarly, organ transplant recipients are frequently unable to control herpesviral replication due to immunosuppressive drugs that likewise inhibit the immune response.

The research groups of Melanie Brinkmann and Stephan Halle will jointly clarify the mechanisms through which KSHV and its homolog murine herpesvirus 68 (MHV68) are first recognized by the immune system and subsequently controlled by the immune system as the infection progresses. They will use two-photon microscopy to directly visualize the interplay between MHV68-infected cells and immune cells. It will thus be possible to determine the factors that are important for viral control on the single cell level.

Additionally, studying KSHV may give novel insights into vital cellular processes. Due to many millions of years of co-evolution, herpesviruses have learned key features of our immune defenses and even use some for their own benefit. How KSHV switches the immune response to favor establishment of its infection is not well understood but an important question. Analysis of its host manipulation will allow new insights into the interplay between KSHV and the host, as well as clarification of how KSHV contributes to cancer development.

To understand the role of multiple pattern recognition receptors in detection of gammaherpesviruses, we turned to MHV68, the murine homolog of KSHV. Due to lengthy co-evolution with their hosts, the gammaherpesviruses are largely limited to infection of their natural host species. Thus, work with a small animal model and KSHV is extremely challenging. However, MHV68 readily infects the laboratory mouse. This has allowed us to analyze the contributions of multiple pattern recognition receptors to detection of MHV68 both in vivo and in vitro. In the current funding period, in vivo imaging will be used to better understand the dynamics of MHV68 infection in its host. We will address the following questions about mouse gammaherpesvirus infection biology

Gammaherpesviruses can infect cells of the immune system. In the case of MHV68, B cell infection is thought to be an important step towards viral spread in the organism. In this project, 2-photon microscopy will be used to investigate where and when the first MHV68-infected B cells appear. It will be crucial to measure the migratory speed and the typical migration directions of these initially infected B cells.

This will allow better understanding of whether these cells are able to leave the initial site of infection, e.g. the B cell follicle, and thus whether they can promote local infection from one B cell follicle to the next B cell follicle. In the mouse model, we can compare the migratory behavior of infected and non-infected B cells. With this approach, we will study the initial stages of MHV68 infection in immunocompetent and immunodeficient mouse models to better understand how the virus interacts with the innate and adaptive immune responses.

2.  In vivo immune control of MHV68-infected cells and the innate immune mechanisms that limit gammaherpesvirus spread

Our second focus is to understand how the gammaherpesviruses KSHV and MHV68 modulate the innate immune response:
We have shown that KSHV and MHV68 inhibit the ability of infected monocytes and macrophages to respond to Toll-like receptor (TLR) stimulation (Bussey et al., JV 2014). To identify the viral proteins responsible for inhibition of TLR-mediated NF-kB induction, we used a luciferase-based reporter assay and identified the KSHV lytic switch protein, the replication and transcription activator (RTA). In addition, we found that the KSHV Protein ORF20 interacts with the interferon-stimulated gene product (ISG) oligoadenylate synthase-like (OASL) and demonstrated that OASL has a proviral function during KSHV and MHV68 infection (Bussey et al., PLoS Pathogens 2018). In the current funding period, we will continue our studies on the KSHV proteins RTA and ORF20 and their role in inhibition of innate immune response, and we will analyse the in vivo role of OASL for MHV68 during the acute and latent stages of infection. 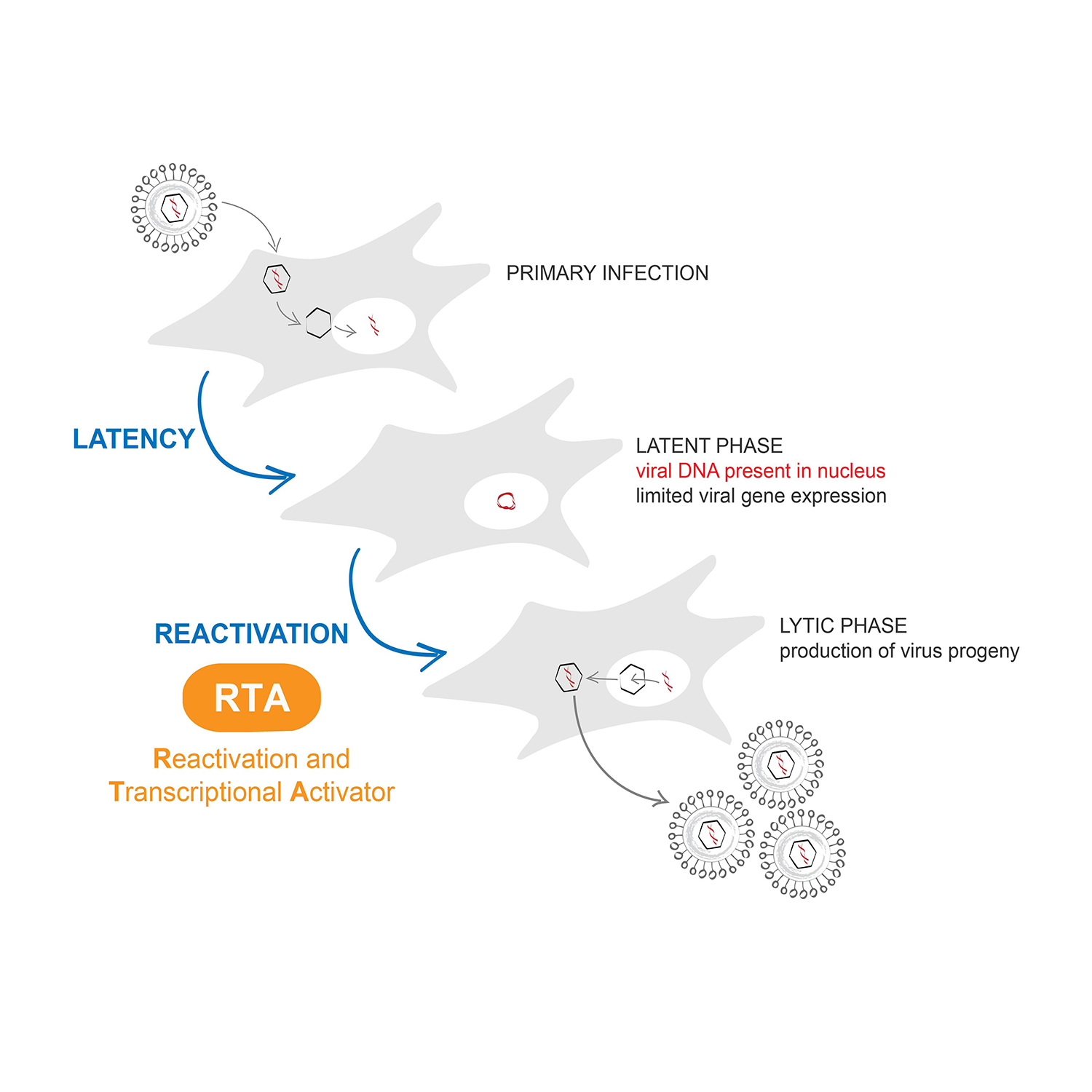 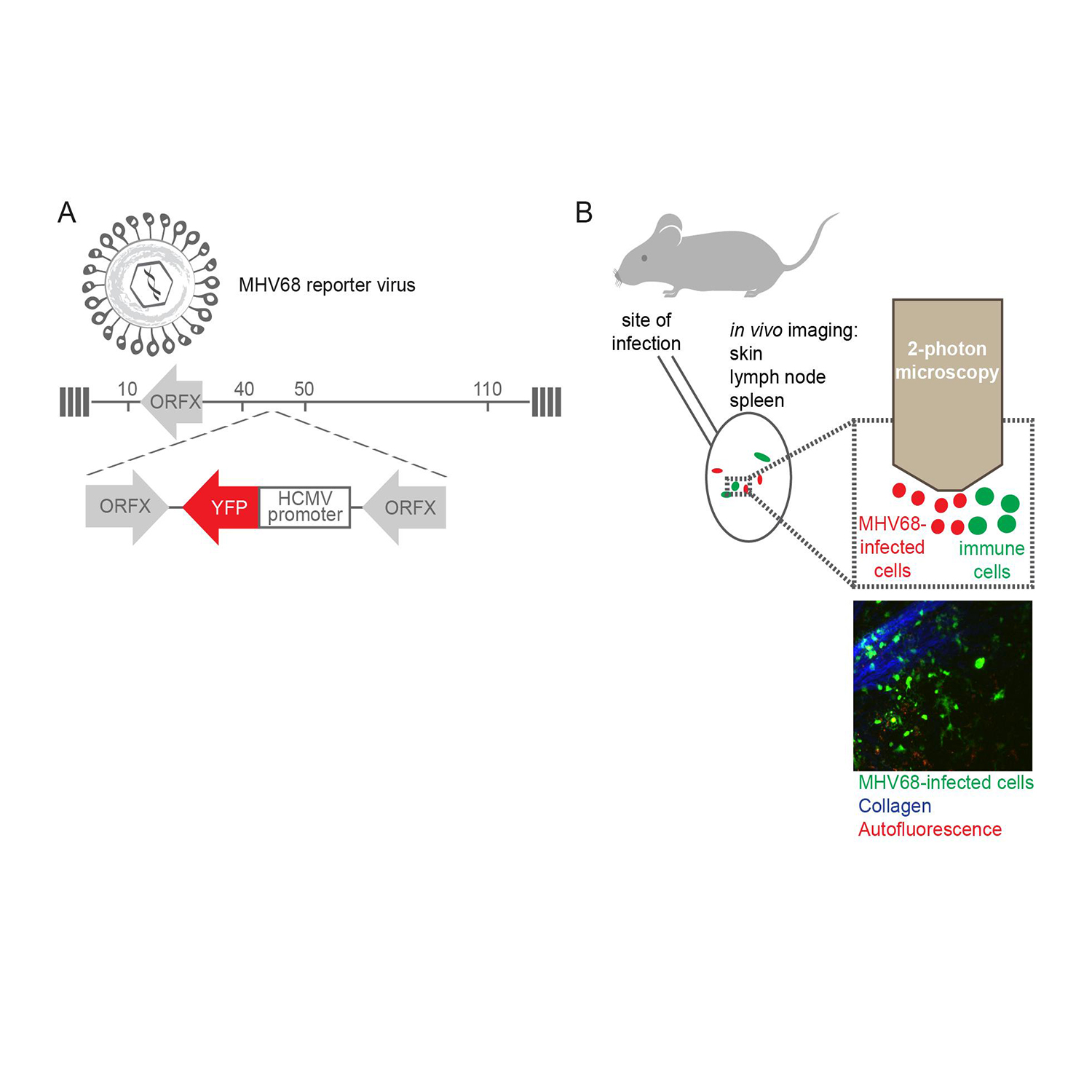 A) The genome of MHV68 can be manipulated by BAC mutagenesis to express fluorescent proteins upon infection of host cells. With these colored reporter viruses, infection can be monitored over time in the living organism. (B) Using 2-photon microscopy, cells infected with reporter viruses can be visualized in different organs and tissues. The mouse popliteal lymph node for example will be analysed because this organ is a potential site for early B cell infection following MHV68 footpad challenge. Here, the interaction between virus-infected cells and colored immune cells can be monitored. The 2-photon microscopy image below the scheme shows MHV68-infected cells in the lymph node.

Melanie Brinkmann has been part of the CRC since it was founded in 2010. Since juli 2018 Melanie Brinkmann and Stephan Halle jointly research the interaction of Kaposi’s sarcoma associated herpesvirus with the innate immune system in project B3.

Publications of the project B3 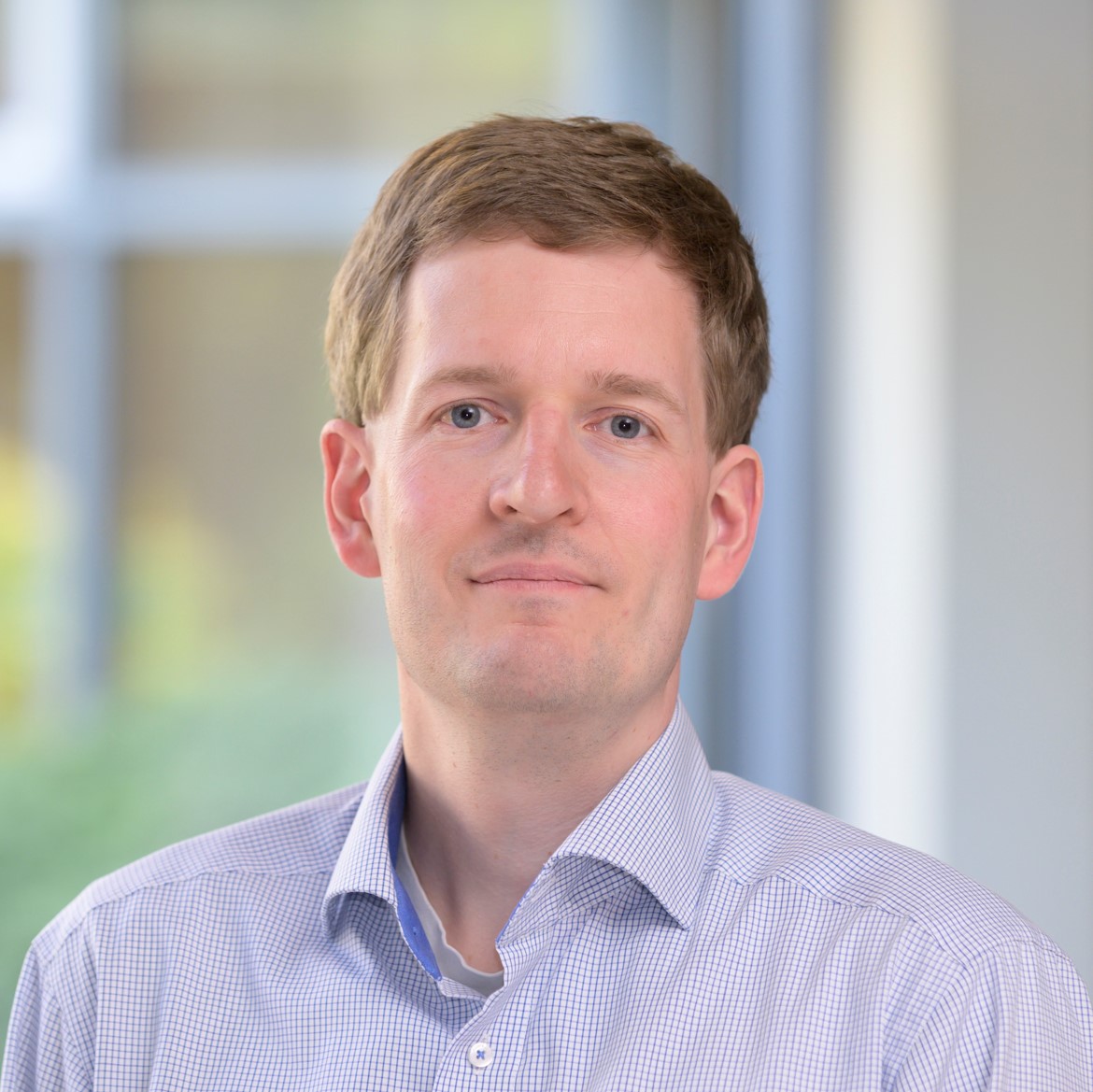